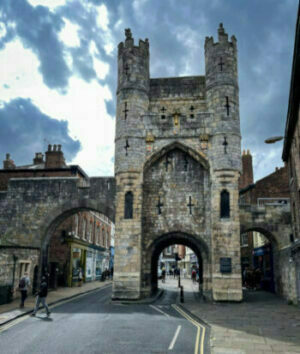 From 10am – 4pm on 15th-16th October, Monk Bar will be opening its usually closed doors to the public as part of York Unlocked, free of charge.

Monk Bar is one of four major fortified gateways on York’s city walls. It was built in several stages, beginning in the early 14th century, when the threat from a hostile Scotland was particularly great. Its top storey was added in 1484 during the reign of Richard III.

Look out for some amazing features from its history, including the portcullis, ‘bartizan towers’ and medieval toilets known as ‘garderobes’.

Monk Bar is owned by York Archaeological Trust and was transformed during the Covid-19 pandemic into a virtual hub, allowing our education team to deliver virtual outreach to schools around the globe.

If you have an interest in architecture, heritage and history then this is the perfect event.